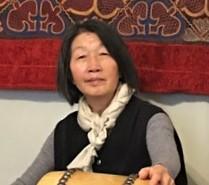 Dr. Park's specialties include research and performance of Korean musical and oral narrative tradition. She is the author of Voices from the Straw Mat: Toward an Ethnography of Korean Story Singing (University of Hawaii Press 2003) and the forthcoming monograph, Pansori as Voice Theatre: History, Theory, and Practice (Forthcoming, Bloomsbury Forms of Drama Series). Park trained in pansori singing under the late virtuoso Chung Kwonjin. Recent artistic productions include Fox Hunt and the Death of a Queen (w/ Kathy Foley, 2012); The Ohio State University annual Wind and Stream celebration of Korean performance (2013-2019), and Look & Listen: Asian Art and Music (w/ the Freer Gallery of Art and the Arthur M. Sackler Gallery, Smithsonian Institution, February 18, 2021).

The formation of an artistic canon is typically a process of contestation and questions about inclusion, scope, and other delimiters. Pansori is a Korean traditional storysinging form where a trained singer, accompanied on the drum, navigates the story’s drama through sung and spoken verse. The genre of pansori emerged from the pre-eighteenth century culture of folk and ritual musical storytelling. In general, it was performed by socially marginalized gwangdae performers, and came into its heyday another century later with generational transmission of talent and style, increased scholarly attention, and the patronage of yangban aristocrats.  Interested singers and literati collaborated to gentrify the text and performance of pansori to meet the changing venue and audience. From a set of twelve pieces, five (Song of Chunhyang, Song of Sim Cheong, Song of Jeokbyeok, Song of Heungbo, Song of the Underwater Palace) were selected and revised into texts for teaching the five signature Confucian cardinal virtues. These five narratives have been foundational in the continuation of pansori.

In this talk, I will examine the built canon of pansori using the contrasts between the included five and excluded seven. What essential condition(s) did the excluded seven fail to satisfy, in terms of art, philosophy, and politics? In response to this question, I will discuss the effects of canon building and future directions for pansori practitioners, scholars, and enthusiasts in the twenty-first century. Q&A to follow.