By the way, he happens to be an ASU Dad!

Meet U Kyaw Thu. He is a two-time Myanmar Motion Picture Academy Award winner and a humanitarian star who has helped popularize free funeral service in Myanmar. Kyaw Thu is the reason that I decided to dedicate my summer field research this year to an organization that he helped found in 2001 and has headed the Yangon Free Funeral Service Society since 2008. 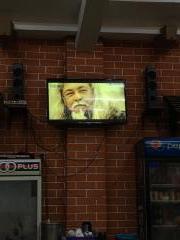 ...When you see your boss appear on TV while waiting for dinner

My current research project focuses on a lay Buddhist social welfare network -- Free Funeral Service Societies (FFSS) -- as a location where existing social and religious practices gain new social roles and create new forms of social engagement with issues of public concern. FFSS started in the late 1990s in response to rising funerary costs as a result of cemetery relocation, and has grown in the past two decades into a large grassroots welfare network of at least three hundred FFSS across the country. While most concentrate on free funeral transportation such as free ambulance service and emergency aids for victims of accidents and natural disasters, only a handful FFSS with a strong donor and volunteer base like Yangon Free Funeral Service Society are able to diversify their social welfare service.

Yangon Free Funeral Service Society is located in North Dagon Township, in the northeast part of Yangon (the largest city and the former capital of Myanmar) . Over the past 17 years, Yangon FFSS has developed different branches of social service: free funeral services, a free clinic, free ambulance service, a firefighting team, a library, and free schools (vocational training and prep-courses for college matriculation exam). In recent years, Yangon FFSS has started an initiative to clean the garbage off Yangon’s streets. This being said, organizations like Yangon FFSS has been an inseparable part of everyday life in Myanmar. 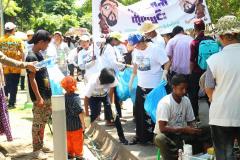 Yangon FFSS’ day-to-day operations involve dozens of full-time employees -- office staff, drivers and mechanics -- and over 400 hundred volunteers. I was one of the volunteers, but the difference is that for research purposes, I came to the organization everyday instead of one day per week as did everybody else. It would be ideal if I could live there and go on rescue missions with the drivers who slept at the office everyday to maintain their 24-hr ambulance service running, but according to Myanmar government’s policy, I could only stay at a hotel permitted to host foreign visitors. Fortunately, nowadays taxi-booking apps (such as Grab, Oway and Billion) are available in Myanmar and they made my daily commuting to and from Yangon FFSS much easier, and most importantly, negotiation-free. 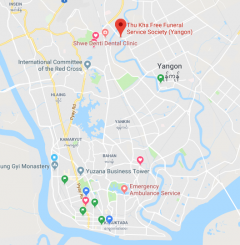 What I did as a volunteer/researcher was simple: a driver and I were assigned to funeral cases to pick up the deceased and send the bodies to designated cemeteries. When the road in front of the organization was being renovated, the construction team had to build a ramp before moving forward so that we were able to operate hearses and ambulance. Looking together at the construction work, the organization’s operational manager said, jokingly, “if they don’t build the ramp, people in Yangon cannot die.” He was, of course, being humorous, but what he said was not totally untrue. Since 2001, Yangon FFSS has helped with over 170,000 funeral cases. It started with around 2,900 cases in 2001. The number increased and reached its peak in 2011 with 14,498 cases, and then slowly decreased as more funeral societies were established in Yangon. Last year, Yangon FFSS delivered over 8,800 cases. If it weren’t for these funeral societies, grieving families would have to face tremendous emotional and financial burdens on top of the loss of their beloved ones . At times I would be assigned to the ambulance team to pick up patients and send them to the hospital or home. After being stuck in the horrible traffic for a few times, I started realizing how significant this type of service was to the residents and commuters living and working side by side in this gigantic city. Yangon is not just big; its streets and alleys are so complicated -- some are narrow, winding, unpaved and even unnamed -- that even experienced drivers would have to rely on additional guidance from members native to the communities of the deceased to navigate local landscapes. Moreover, with the current traffic condition in Yangon, it took hours to complete any funeral case. One day, it took a young driver and me 10 hours to just pick up and deliver two bodies to Yay Way Cemetery (located also in the north part of Yangon) and to Htein Pin Cemetery (located in an industrial zone in the far west part of the Yangon metropolitan area).

Emergency services play an even more critical role to ordinary people. The terrible traffic conditions only make it more challenging for ambulance drivers, who sometimes need to take the risk of driving on the opposite side to rush patients to the hospital. (It might sound normal in other places, but it is extremely scary doing that in Yangon’s streets.) On top of the ambulance service, Yangon FFSS also dedicates itself to disaster relief. Every year during the rainy season, Yangon FFSS, as well as many other FFSS across the country, would send out their workers to rescue people trapped by the flood along the Irrawaddy River and distribute food, drinking water, and other essential goods in affected areas. The rescue missions for this year are still ongoing as I am writing.

Epilogue: In early July, sitting in my hotel room, I came across a news story about a woman being trapped by a subway train in Boston, and to my horror, the badly injured woman had to beg fellow passengers not to call emergency service because she couldn’t afford the ambulance bill. It was such irony. In the US, which is known as a developed country, people fear for the ambulance bill more than their critical medical condition. In Myanmar, which is considered one of the least developed countries, people see paid emergency services as immoral due to the added burden to people who are already suffering.

At last, I want to dedicate this short blog post to Ma Thin Thin Aye (1972-2018), also known as Ma Mi Mi. Ma Mi Mi has been known as a democratic hero of the 88 generation. She was arrested and jailed multiple times for her involvement in political movements for democracy. She was detained for four months in 1989 when she was still a high school, and again was arrested in 1996 and sentenced to seven years in prison when she was as a college student at Dagon University. During the Saffron Revolution in 2007, Ma Mi Mi was arrested again and released in a general amnesty in January 2012. She had been a volunteer with the ambulance team at Yangon FFSS since 2017 and unfortunately, passed away in a car accident on August 13 this year. She had dedicated her life to the freedom and welfare of Myanmar and its people. May she rest in peace.