Enveloped by the Prophet 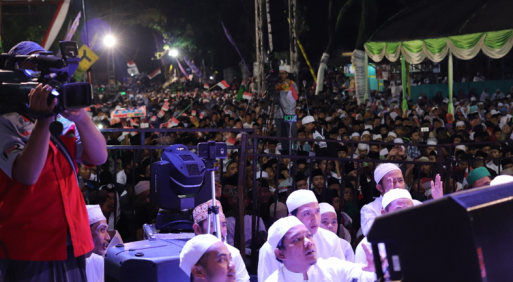 A crowd in Bandung, Indonesia awaits the arrival of Habib Syech.

The events swirling around Habib Syech bin Abdul Qadir Assegaf bring tens of thousands of people together across Indonesia almost every night. Religious and political elites fill the stage as other people from diverse backgrounds gather in the fields, alleys, streets, and stadiums and press the event into service of their desires. Habib Syech leads devotional songs about the Prophet Muhammad (selawat) accompanied by thirty musicians and thousands of voices. Screams of “Allah” boom into the night air followed by a steady stream of confetti. These events bring together a wide range of things both material and immaterial. Flags, perfume bottles, food, glow sticks, cell phones, and confetti fuse with the flash of lights emanating from the stage, the smell of wet grass, the taste of snake fruit (salak), and the humidity that clings to the back of the neck. People, things, histories, and the aura of the divine converge to create a corporeal experience of Prophet Muhammad’s presence. 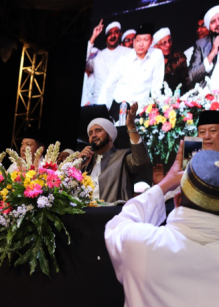 As one student recounted to me, “I feel that the Prophet arrives at selawat when we stand. When I do selawat, and I have a burden, I feel like the prophet hugs me, and I am released from this burden.” For her, this is not a metaphorical arrival of the Prophet; he is present and encircles her to expel her burden. The feeling of Prophet Muhammad's presence is not an uncommon sentiment expressed by individuals arriving to take part in the events. Some of the common burdens are dating, financial security, success in business or school, life after death, and adaptation to the ‘modern world.’ These events are moments and places in which the problems of Indonesians on a national scale are collectively worked through and performed. However, the raison d'être of these events only becomes clear when the gaze is shifted from a discussion of political and religious power to the hands that wave in the scent-filled air lit by purple and blue lights. 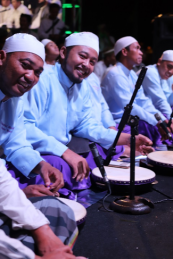 Musicians pose during an interlude in the music.

These events bring massive amounts of people together, but they also bring together individuals from conflicting Islamic backgrounds as well as socio-economic groups. Part of the popularity of these events is driven by the fact that so many influential figures, such as the prime minister of Malaysia, the president of Indonesia, and the heads of Islamic organizations populate the stages above the crowd. However, it is the perceived presence of Prophet Muhamad and God through the convergence of people, things, and histories that generates the enormous and continual growth of these events, which not only help individuals become more pious but deal with the growing pains of modern life.

I did not begin studying the phenomena of selawat until I was directed to them by a rural mystical Islamic teacher in 2012. However, on the first day that I met Habib Syech, he asked me to sit with him and asked me to ask question after question in front of several thousand Indonesians. This initial interaction provided me access to a vast diversity of actors. I attended his larger events that typically had 30-70,000 people coalescing in rice fields, stadiums, and streets across Indonesia and Malaysia. Between 2012 and 2018, I attended over one hundred of these events, and spent extensive time living, interviewing, and existing with the musicians, Habib Syech, family members of Habib Syech, and the other various actors who came to these events.

Through my ethnographic investigation of these events, it became clear that they were sites of radical transformations in piety not only in Indonesia but Asia more broadly, as he performs in Malaysia, Taiwan, China, and South Korea.  This transformation was indexed to baraka, usually translated as blessings. Women rushed pass me saying ‘baraka, baraka, baraka.’ A man grabbed a water bottle said to contain baraka, ripped off the cap, and sprayed it on the crowd as his eyes rolled back. People came for blessings, and my larger project lays bare how, by focusing on the idiom and life of baraka in and through these events, it becomes that baraka is the pole around which a wide variety of Islamic, socioeconomic, and cultural backgrounds coalesce to form new expressions of piety. This new form of piety is furthermore a feature of contemporary Islamic society and a foundational concept often glossed over in works on Islam in the global world.

This attention to baraka reinserts the ineffable, mysterious, and invisible in the material world, bringing about a (re)enchantment of contemporary life. It provides a different way of understanding Islam beyond the five pillars and discursive traditions. For religious studies scholars and those interested in religion in the contemporary world, this work builds from a lived-religion approach and the material turn in Religious Studies. These studies rely on understanding religion as a socio-cultural phenomenon often impacted by material conditions, but they also push beyond this by drawing from the Ontological turn in anthropology and reinserting Habib Syech’s assertion that blessings matter. 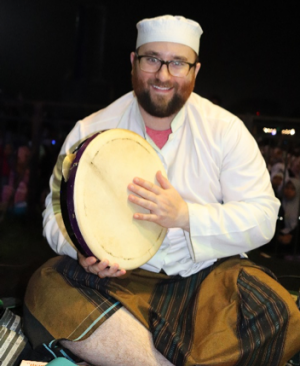 James Edmonds is a Ph.D. candidate in Religious Studies currently writing his dissertation