Experiencing Language and Culture in Kathmandu 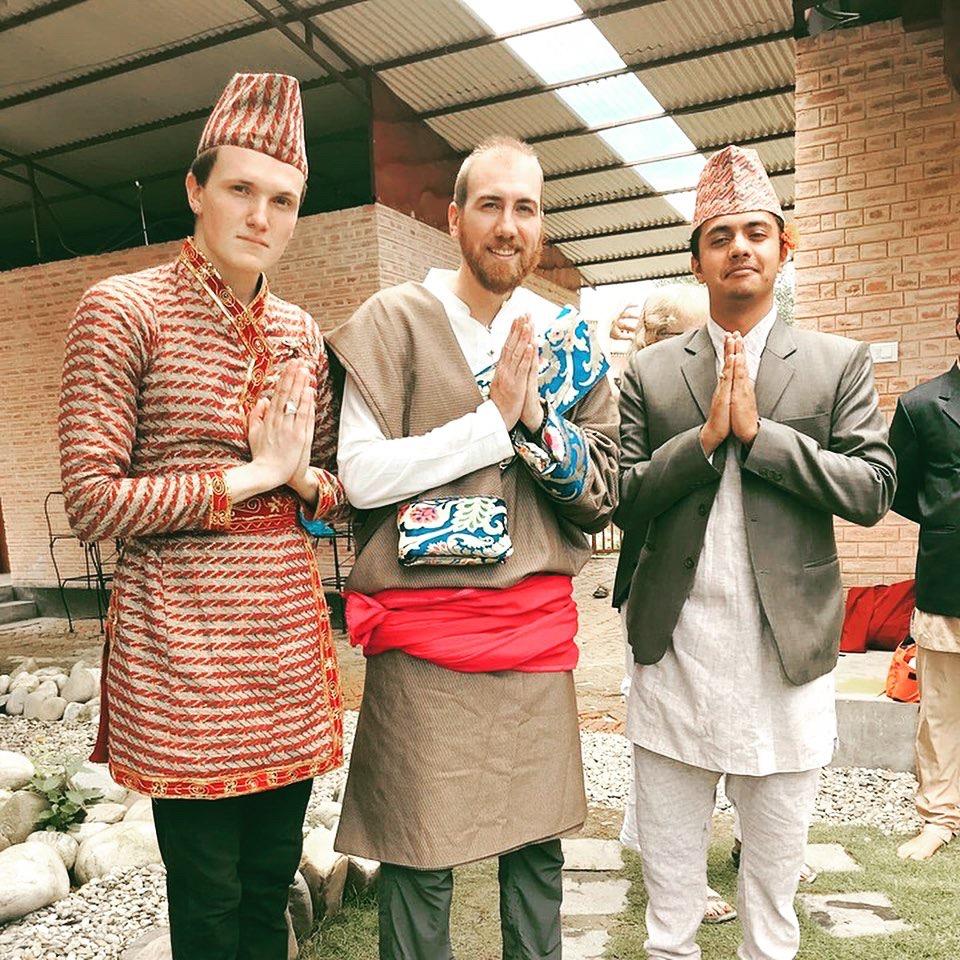 This past summer I was graciously awarded a Foreign Language and Area Studies (FLAS) fellowship through the Center for Asian Research to continue my Nepali language learning in Kathmandu, Nepal. With only basic reading comprehension and speaking abilities I was a bit nervous about the prospect of being thrust in to an immersive in-country program where my abilities to speak and comprehend Nepali would be tested day in and day out. But, like most things in life I took it as an opportunity to move outside my comfort zone. I believe that learning, and especially foreign language learning, happens when one embraces the vulnerability of not knowing. The language program that I attended was facilitated by Rangjung Yeshe Institute (RYI)—Kathmandu University’s Centre for Buddhist Studies—located on the grounds of a Tibetan monastery known throughout the Kathmandu Valley in Nepali as seto gumba (white monastery). Beyond its whitewashed exterior walls, I was never given an explanation for the nickname. Situated in the Bouddha district northeast of Kathmandu’s city center, RYI offered a peaceful environ to learn alongside nearly one hundred other summer students from across the globe taking language courses in classical Chinese, classical and colloquial Tibetan, classical Sanskrit, and Nepali, and roughly thirty who were enrolled in RYI’s intensive Buddhist studies course which employed both traditional Tibetan and Western academic styles of teaching. As the smallest cohort (nine of us) the beginning and intermediate Nepali courses grew quite close throughout our two-months of study together. Many of us stayed in Nepali-speaking households as part of RYI’s homestay program and those who didn’t made a conscious effort to seek out opportunities to participate in extracurricular activities which required speaking Nepali beyond the classroom. The program at RYI facilitated weekly journeys (Nepali: yātrās) to other parts of the Kathmandu Valley as opportunities for cultural immersion. 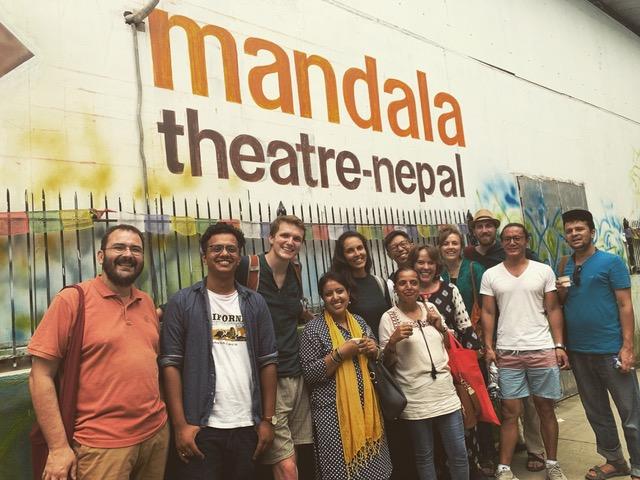 As anthropologists have noted language is intractably linked to culture, and the program at RYI afforded numerous occasions to engage in conversational Nepali in the midst of learning about the rich multi-cultural history of the Kathmandu Valley. Trips to Kathmandu’s city center, “Durbar Square,” to purchase Kathmandu’s “best” lassi (a favorite yogurt-based drink in Nepal) and to the rural township of Sundarijal for dinner in a traditional Nepali household highlight just a few of the immersive aspects of RYI’s programing. Another wonderful, but challenging, experience was attending a performance (entirely in Nepali) at the Mandala Theatre (pictured). 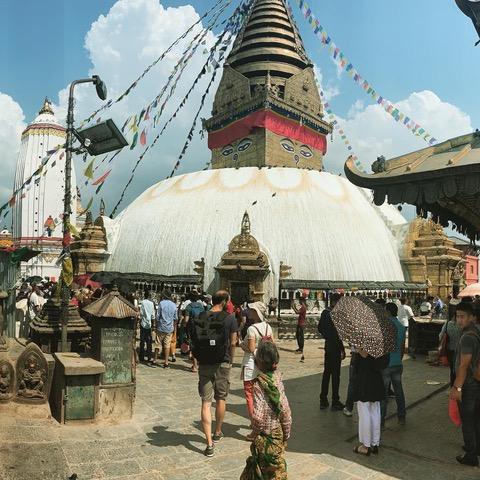 As a Ph.D. candidate in Religious Studies at ASU, with interests in the religious traditions of South and Southeast Asia, I took advantage of multiple opportunities, both with RYI and individually, to explore the living history of Buddhism in the Kathmandu Valley. A guided tour of Swayambhunath (pictured on the left), perhaps Kathmandu’s most recognizable Buddhist landmark, by Dr. Gregg Sharkey from RYI was an enlightening experience. Multiple trips to the districts of Lalitpur and Bhaktapur (pictured below) to enjoy the beautifully hand-crafted wood and brass architecture of the Newar “Buddhist” community indigenous to the region was a breathtaking foray into pre-colonial life. As skilled artisans the Newars have been at the center of trade and commerce in the Kathmandu Valley for a millennium, and their involvement in trans-regional trade is thought to have facilitated the transmission of Buddhism between the Gangetic plain and the Tibetan plateau. Historical evidence attests to the influence of Newar stylizations in temple complexes as far east as Japan. 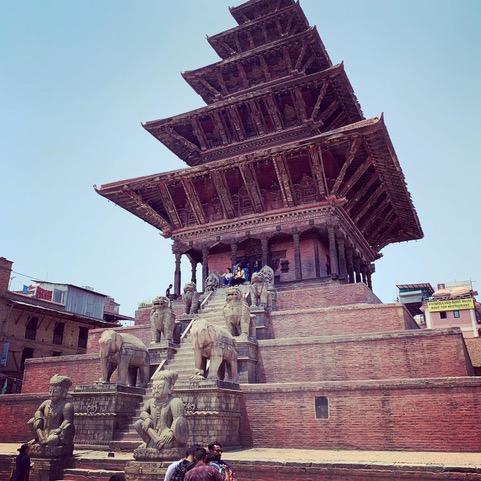 In addition to improving my language skills exponentially my time in Nepal also served as an opportunity to establish connections in preparation for my dissertation research. I am working on a project which looks at the modern history and development of the Buddha’s birthplace at Lumbinī in the rural Terai region of Nepal—only a few kilometers north of the Indian border. As the site of one of the Buddha Śākyamunī’s four major life events (birth, enlightenment, first teaching, and death) Lumbinī has occupied a central position in the Buddhist imaginary for over two millennia. Historical and archeological records indicate that the site has been situated in a network of pilgrimage throughout “Ancient India,” at least since the time of King Aśoka (circa 3rd century BCE). However, sometime between 1200 and 1400 CE the site was lost to the elements. It was later unearthed in 1896 by team of colonial archeologists and members of Nepal’s princely elite. My research seeks to understand why so much attention has been paid to Lumbinī in the past 100 years since its rediscovery. The emergence of the Buddha’s birthplace on the world stage since the late 1960’s raises several significant questions about the interplay between world religions and the processes of infrastructure and economic development in “third world” Asia. In this “sacred space,” the expectations and narratives connected to the project of development (not to mention cold war geo-politics) have become entangled with the sustained piety of everyday life. In addition to being a meaningful site of devotion for millions of Buddhist pilgrims who visit every year between December and April as part of circuit through the life-places of the Buddha, Lumbinī has also come to occupy a significant position in recent economic and political discourses within Nepal. Since the full dissolution of the Nepalese Hindu monarchy in 2015, indigenous communities and ethnic minority groups (Nepali: janajati), such as the Newars, have sought to utilize the social capital of the Buddha’s birthplace to establish and assert socio-political identities in light of a globally recognizable Buddhism. Thanks to the FLAS fellowship from the Center for Asian Research I was afforded the opportunity to spend a better part of a week at Lumbinī. Informal conversations and semi-structured interviews with members of the communities in and around the site in the rural Terai provided valuable insight into the daily motions of this unique place which was inscribed as a “World Heritage Centre” by the United Nations Educational, Scientific, and Cultural Organization (UNESCO) in 1997. I am grateful for the opportunity to spend a little over two months in Nepal with the support of a FLAS fellowship from the Center for Asian Research, and I am excited about future opportunities to return to Nepal for research and continued language learning.