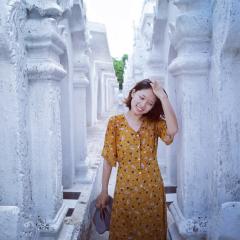 When a new Chapter of the NGO was opened in Myanmar she requested to be relocated to Myanmar. Initially, she worked as a volunteer to set up the organization and over time she got interested in studying how ethnic conflict between Buddhists and Muslims reflected on monastic education. However, she realized that gender related issues would limit her access to resources from the monastery.

After discussion with her academic advisor Professor Juliane Schober, she decided to change her 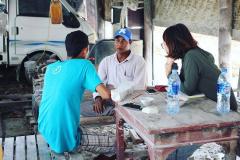 Talking to a carving artist

topic to something related to Chinese population in Myanmar. Her travels in Southeast Asian countries like Malaysia sensitized her to issues of identity faced by Chinese population as their cultural identity as Chinese came at odds with their national identity of particular Southeast Asian country in which they lived. Chinese people also had a long history of migration to Southeast Asian countries like Malaysia and Myanmar. These things helped her arrive at the decision that it was possible to do a disseration related research on Chinese people in Southeast Asia. After this she undertook two research trips to Myanmar to figure out an interesting topic for research. During her first trip she noticed that Buddha statues in ethnic Chinese associations did not look like the Chinese images of Buddha that she was familiar with back home in China. When inquired, she realized that the images were made by Myanmarese artists. However, both the Myanmarese artists and the local Chinese insisted that these were indeed Chinese images and not Burmese images. She thus became sensitized to the difference between her perception of the images and that of her Myanmarese interlocutors. 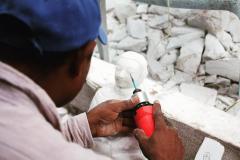 This raised questions in her mind as to how this style of image making came into being, and how people have their identities linked with these images. This summer she traveled to Myanmar again and was introduced to the industry that makes these images. She focused her research attention on carving, and decision making by the artists. She noticed that a Border town named Sagyin has developed over the period of the decade which and that it operates as a transit point for circulation of the Buddha images. After discussing with her advisor, she decided to focus on the topic. Chinese customers or brokers, usually visit the town to make modifications to images. She is as interested in knowing the clientele of these images and what factors influence their decisions to purchase.

The question that interests her the most is: "Why do Chinese come to Myanmar to buy Buddhist images of style that is so different from traditional Chinese style?" 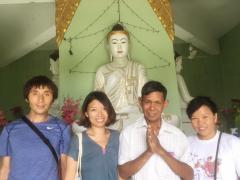 With a carving master

Beiyin is in the anthropology of religion track. Her supervising committee consists of Professor Juliane Schober, Professor Huaiyu Chen, Professor James Rush, and Professor Alexander Henn. She is currently taking courses in ethnography and applying for dissertation fellowships. She looks forward to taking up teaching related jobs in the future.